Home » Just Because Someone is Thin, Doesn’t Mean They’re Healthy

Just Because Someone is Thin, Doesn’t Mean They’re Healthy

We all know that one person; you know, the one who can eat all they want and stay lean, thin, skinny or whatever you want to call it, all without exercising. Who knows, maybe that is you. We look at them with envy and maybe even with daggers in our eyes. They’re admired in social […]

We all know that one person; you know, the one who can eat all they want and stay lean, thin, skinny or whatever you want to call it, all without exercising. Who knows, maybe that is you. We look at them with envy and maybe even with daggers in our eyes. They’re admired in social circles as if they have done something special. Maybe they have a higher metabolism or a hollow leg as my mother would say, and of course they must be healthy because they’re not overweight.

With more than half of adults in developed countries overweight or obese, we hear a lot about the health concerns with having excess weight (really, we mean excess body fat). I’ve even written about it here. And it’s good to raise these issues because having excess fat is indeed a health concern and a risk factor just like having high cholesterol or high blood pressure.

So if being overweight and obese are not healthy, then surely being lean is, right? Well not always.

There are a number of situations where being lean doesn’t mean a person is healthy. The most extreme and obvious case is people who die from an infectious disease such as HIV/AIDS or tuberculosis, in which death is preceded by a period of the body wasting away. Now most of us live in areas where these conditions have been eradicated or can be readily treated, however, in countries where they are still apparent, the historical culture is one such that being overweight is actually considered a good thing.

A much more familiar situation, is the person who has an ideal body mass index (BMI) (calculated by taking one’s weight [in kilograms] and dividing it by one’s height squared [in metres]). An ideal BMI is between 18.5 and 25 kg/m2. For example, a person who is 6 feet and weighs 170 pounds has a BMI of 23.1 kg/m2. A value of greater than or equal to 30 is defined as obese, while a value of 25 to 30 is overweight. This notion of the ideal BMI range comes from studies that show that risk for heart disease and early death are lowest at these values.

The problem with BMI is that it is a measure of weight, and is not specific to excess fat as weight also includes bone and muscle. It is excess fat, not excess weight that is the concern. Over the years, my research program has studied how excess body fat relates to risk for diabetes and heart disease, and where that fat is located.

Fat around the waist is more problematic than fat elsewhere in the body. Having a big waist can increase your risk for heart disease and early death even if you have an ideal BMI. And this risk can be greater than someone who has a higher BMI. 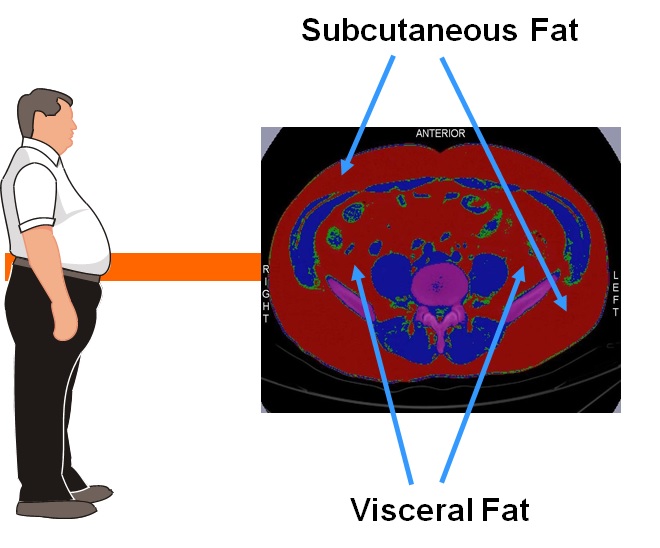 There are two main compartments of fat around the waist: subcutaneous and visceral (measured by CT or MRI scan). Subcutaneous fat rests between your skin and stomach muscles. This is the fat you can grab or call love handles. Visceral fat is located deeper in the stomach and rests under the muscle wall. This is the fat that sits around our organs. Visceral fat takes up a much smaller area but it packs a bigger punch than subcutaneous fat.

Once thought to be a benign place to store energy when not in use, fat (or adipose tissue) is now known to be an active organ releasing hormones involved in regulating appetite, energy supplies and storage. The amount of fat we have is also related to risk factors like cholesterol, blood sugar and blood pressure, and depends more on how much visceral fat we have compared to subcutaneous fat. We have shown that the amount of visceral fat is associated with atherosclerosis in the carotid (neck) arteries, while subcutaneous fat is unrelated.

How much visceral fat someone has can differ from person to person, and with that, their risk for disease. In a lot of cases people with high amounts of visceral fat often have a larger waist and that is the obvious sign but it isn’t always the case. Someone can be considered thin (like our friend at the beginning) and still have a high amount of visceral fat. In other work of ours, we have found that people of South Asian background generally have a higher amount of visceral fat than other ethnic groups even at the same waist size. This pattern of body fat accounts for the higher risk for diabetes and heart disease in South Asians, but it isn’t just found in South Asians (although it is more common), it can be in any population. 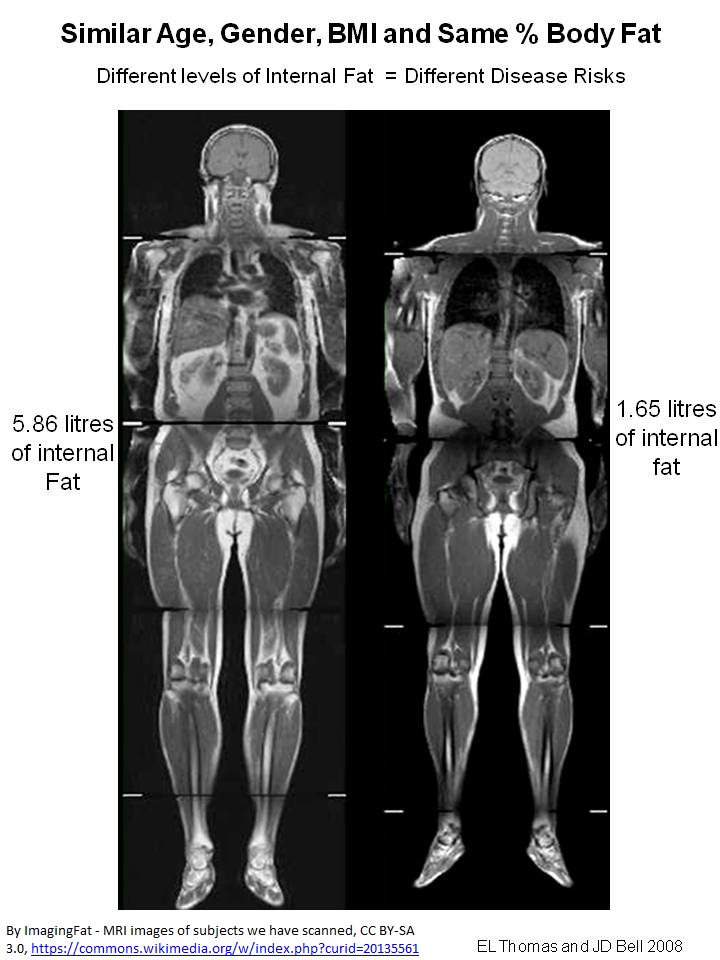 Getting back to that thin friend of ours who can eat as much as he/she wants, it is possible he/she is healthy but if the person isn’t exercising it is more likely that he/she has a high amount of visceral fat. These people are referred to by terms such as thin on the outside but fat on in the inside (TOFI) and metabolically obese but normal weight (MONW) and commonly have a number of risk factors for diabetes and heart disease. In addition, they are less active. This is important to note as regular exercise may have a stronger effect on reducing visceral fat than subcutaneous fat. Put this altogether and it leads to a greater risk for heart disease and early death.

While we don’t have people do a CT or MRI scan to measure visceral fat, there are other ways to determine a person’s risk. First and foremost is a person’s lifestyle factors; is the person active or not, does he/she smoke, what is their nutrition like. Additionally, measuring blood pressure and getting a blood test for sugar and cholesterol are important.

The bottom line is that just because someone is thin, we should not assume he/she is healthy or protected from getting diabetes, heart disease or some other chronic illness. Doing so could potentially result in later problems for that person if a disease does become apparent.

2 responses to “Just Because Someone is Thin, Doesn’t Mean They’re Healthy”