Home » Exercise Your Way to a Better Relationship

Exercise Your Way to a Better Relationship

Need a relationship boost? Or looking to start a new relationship? Try going for a run, or a swim, or any other type of exercise. This isn’t so you can get away from the relationship, but rather to improve it. People who exercise are more satisfied in their marriage compared to those who don’t. Specifically, […]

Need a relationship boost? Or looking to start a new relationship? Try going for a run, or a swim, or any other type of exercise. This isn’t so you can get away from the relationship, but rather to improve it. People who exercise are more satisfied in their marriage compared to those who don’t. Specifically, exercisers report more positive marital events and less negative ones.

There are probably a number of reasons why exercise can affect your relationships. First off, exercise makes people happy. It also reduces stress, anxiety and depression. And with these benefits, it’s easy to see how it can improve how you relate to others. 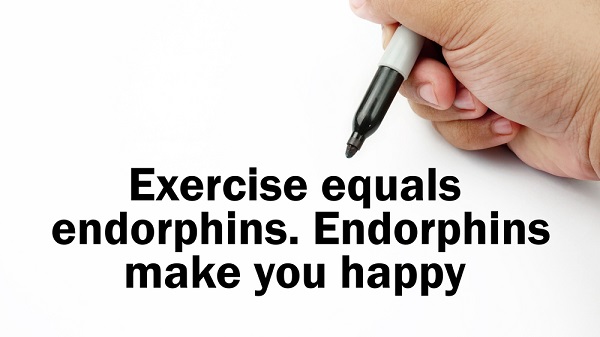 Exercise was made to Improve Relationships

When you exercise, your body releases endorphins and adrenaline. Endorphins are called the happy hormone as they act like an opioid to block pain and give you a sense of euphoria. People who exercise regularly report being happier. And the effects occur even after a single session. This happiness can also lead to more positive social events well into the next day.

Adrenaline is also released as a result of exercise. It raises your heart rate, speeds up your breathing and increases your blood pressure. These are all similar responses to being aroused. And there is some evidence to suggest our bodies may mistake this for actually being aroused. Indeed, following a 15 minute exercise session, adults reported greater attraction to pictures of the opposite sex compared to those who didn’t exercise.

Exercise also improves your confidence and self-image, which can make others more attracted to you. One’s confidence, or self-efficacy (belief in your own abilities), tends to be tied to how much exercise you do. People who report doing less exercise over time, also report lower self-efficacy.

When it comes to self-esteem and body image (one’s satisfaction with your own body), these too are greater in people who exercise. And it doesn’t seem to matter what a person’s body size is. What does matter is how often you exercise. But not how intense or how long. In addition, older adults appear to see greater increases in their body image with exercise than younger adults.

The other benefit of exercise is that it’s an active and outward behaviour. Most people when they exercise, even if alone, are out in the community, whether outside or in some sort of public centre. It’s not a passive and inward activity such as sitting.

Couples Who Exercise Together, Stay Together

The benefits may also be greater when you exercise together. It’s not just about spending time, although that certainly helps. And of course, there’s the natural bond that comes from sharing a common and enjoyable activity with someone else. But it may go beyond this as couples participating in shared physical activity reported increased relationship quality. And strangers participating in exercise together found themselves more romantically attracted to one another compared to pairs engaged in a non-active activity.

If you want to take it up another notch. Try exercising in activities that require similar movements. This mimicking of one another can make you more engaged together. It can increase cooperation, even in strangers, and result in a release of endorphins.

Exercise is also a form of play. If you watch kids (or remember when you were one), play for them consists of running around, climbing and jumping, very similar activities to most types of exercise. In many instances, such as sports, play is directly inherent in the activity. This social play provides it’s own reward by releasing endorphins.

The effects of exercising together and strengthening relationship ties are also self-fulfilling. Planning to exercise with a partner, friend or team builds accountability to your routine. This accountability makes you more likely to keep exercising. And when you exercise with someone else, your relationship with that person improves making you more likely to exercise and thus continuing the cycle.

So next time you exercise, remember, you’re doing yourself good, plus your relationships and those you care about.

2 responses to “Exercise Your Way to a Better Relationship”